CONSIDERING ONTRAPORT?
GET MY "LAUNCHPAD" CAMPAIGN TEMPLATE BUNDLE + GROUP COACHING
(WORTH $1,962) FOR FREE WHEN YOU SIGN UP THROUGH US!

Those who've just opened (or are just about to open) an Ontraport (formerly Office Autopilot) account.

If you're in either of these two boats and you're already considering working with me, then you, my friend, have been blessed with foresight of near superhuman proportions. Congratulations. I can help avoid the following tragic (yet wildly common) fates:

Working with Ontragenius will help get you vastly better results out of ONTRAPORT in a fraction of the time.

Those who've been using ONTRAPORT for a while.

If you’ve had the (sickening) feeling that you’ve been paying for a Ferrari, but using only the glove compartment, then I can help you, too. There’s no better time to call in professional help than right now (well, yesterday or last month would’ve been better, I’ll grant you, but I’m fresh out of time machines, sorry).

To learn more about how I can help you, click here.

CONSIDERING ONTRAPORT?
GET MY "LAUNCHPAD" CAMPAIGN TEMPLATE BUNDLE + GROUP COACHING
(WORTH $1,962) FOR FREE WHEN YOU SIGN UP THROUGH US! 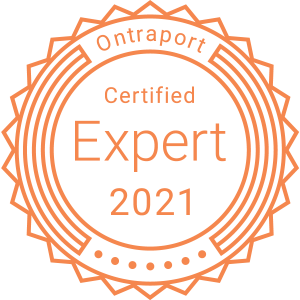